On the right, for example, there are folks like “Deplorable Mike,” @wmgill57, who Tweeted at 6:55 p.m., July 23, 2017, “We all must work as a well oiled machine. There may not be shooting (yet), but we’re at war with the hate America crowd nonetheless. #MAGA.” Deplorable Mike apparently is absolutely convinced that anyone who doesn’t support Mr. Trump hates America. I would imagine he has had few, if any, conversations with neighbors who don’t support Mr. Trump to find out their level of true patriotism. Mike just knows.

On the left, for example, folks like “McSpocky,” @mcspocky, whose Tweet at 10:06 a.m. on July 23, 2017, stated that “The people who most support the Republicans & the Tea Party…#Resist (by Jailing tRump).” McSpocky went further with his Tweet by attaching a photo meme.

The photo shows a stocky man wearing a bandana and a tee shirt with an American flag that reads “Thank God for Fox News.” Next to the photo is the following statement:

“The people who most support the Republicans and the Tea Party carry a secret burden. Many know that they are one medical emergency or broken down car away from ruin, and they blame the government. They vote against their own interests, often hurting themselves in concrete ways, in a vain attempt to deal with their own, misguided shame about being poor. They believe ‘freedom’ is the answer, even though they live a form of wage indenture in a rigged system.”  -Edwin Lyngar, Reno, Nevada, Occupy Democrats.

There is little middle ground between Deplorable Mike and McSpocky or Edwin Lyngar, except for a small sliver of ground for which they are not aware. On this tiny strip of common ground, they both believe they know everything there is to know about the other side, and they don’t like what they see. No, that is too weak; they despise what they think they know of the other side.

Mike and McSpocky and the thousands of social media warriors we witness daily share a tribal loyalty to their side, as well as supreme arrogance to believe they know everything there is to know about the other tribe. They have fallen into a human trap that psychologist Jonathan Haidt described in detail in his book, “The Righteous Mind: Why Good People are Divided by Politics and Religion.” This book should be required reading before anyone is allowed on social media after the 2016 presidential election. (http://www.nytimes.com/2012/03/25/books/review/the-righteous-mind-by-jonathan-haidt.html)

Regaining civil discourse in America across the political spectrum will make America strong and functional again. Civil discourse and reading and watching news from many different sources — left, right and center — is a good way to understand other perspectives. If you really stop, look and listen to the words beneath the words, you will find that liberals, conservatives and moderates all love their country. They all want what’s best for the country. There are good people on left and right and center. Try to leave your defensiveness at the door and listen.

There are good ideas among conservatives and liberals. Sometimes a hybrid idea might just work and get us moving. Those embattled in their beliefs and enraged at the other side could be bound too tight to their chosen tribe and unable to see beyond. We should not reject a good idea just because another tribe suggested it first, but that is what’s happening. We should not accept an idea or action just because our tribe produced it, but that, also, is happening.

If any righteous warriors out there have paused for a moment to read this blog post, I would encourage you further to stop, look and listen. Take a strategic pause. Find a person on the other side of the political spectrum who you know to be a good person. Find someone you can trust who thinks differently about politics. Start an honest conversation to find out what they really believe and what they stand for and why. What is their vision of a good quality community or their vision for their country? Ask them with sincerity and without judgment. Then explain what you believe and why, without personal attacks.

It is not your job to win your conversation partner to your way of thinking; you just need to understand what they are thinking and why. You might be pleasantly surprised at the common ground you find. The ability to have these calm and civil conversations is becoming a lost art. We must gain it back! 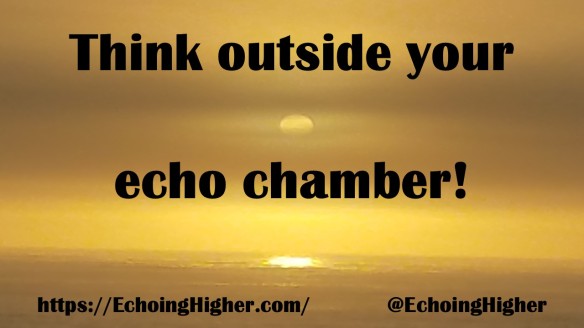 Just think what we could accomplish in America today if we spent our energy on finding solutions to our problems instead of finding villains to blame? 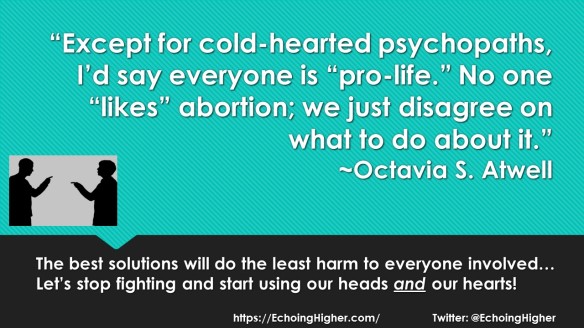 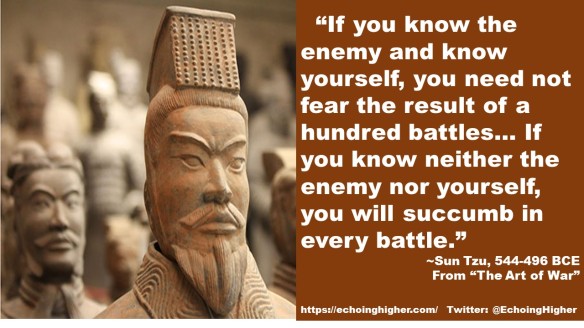 Your enemies are lack of knowledge, division, and failure to work together to seek creative “win-win” solutions to problems that affect us all!